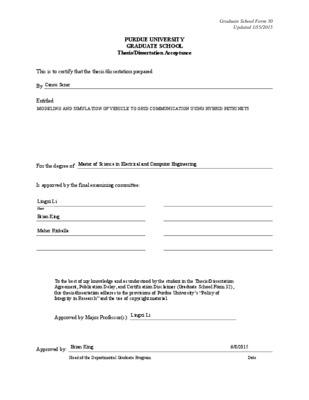 Indiana University-Purdue University Indianapolis (IUPUI)With the rapid growth of technology, scientists are trying to find ways to make the world a more efficient and eco-friendly place. The research and development of electric vehicles suddenly boomed since natural resource are becoming very scarce. The significance of an electric vehicle goes beyond using free energy, it is environ- mental friendly. The objective of this thesis is to understand what Vehicle to Grid Communication (V2G) for an electric vehicle is, and to implement a model of this highly efficient system into a Hybrid Petri Net. This thesis proposes a Hybrid Petri net modeling of Vehicle to Grid (V2G) Communication topology. Initially, discrete, continuous, and hybrid Petri net's are defined, familiarized, and exemplified. Secondly, the Vehicle and Grid side of the V2G communication system is introduced in detail. The modeling of individual Petri nets, as well as their combination is discussed thoroughly. Thirdly, in order to prove these systems, simulation and programming is used to validate the theoretical studies. A Matlab embedded simulation program known as SimHPN is used to simulate specific scenario's in the system, which uses Depth-first Search (DFS) Algorithm. In addition to SimHPN simulation program, Matlab program is made to output four levels of the reachability tree as well as specifying duplicate and terminate nodes. This code incorporates a technique known as Breadth-first Search (BFS) Algorithm