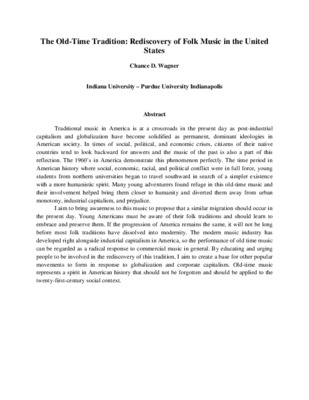 The Old-Time Tradition: Rediscovery of Folk Music in the United States

poster abstractTraditional music in America is at a crossroads in the present day as post-industrial capitalism and globalization have become solidified as permanent, dominant ideologies in American society. In times of social, political, and economic crises, citizens of their native countries tend to look backward for answers and the music of the past is also a part of this reflection. The 1960’s in America demonstrate this phenomenon perfectly. The time period in American history where social, economic, racial, and political conflict were in full force, young students from northern universities began to travel southward in search of a simpler existence with a more humanistic spirit. Many young adventurers found refuge in this old-time music and their involvement helped bring them closer to humanity and diverted them away from urban monotony, industrial capitalism, and prejudice. I aim to bring awareness to this music to propose that a similar migration should occur in the present day. Young Americans must be aware of their folk traditions and should learn to embrace and preserve them. If the progression of America remains the same, it will not be long before most folk traditions have dissolved into modernity. The modern music industry has developed right alongside industrial capitalism in America, so the performance of old time music can be regarded as a radical response to commercial music in general. By educating and urging people to be involved in the rediscovery of this tradition, I aim to create a base for other popular movements to form in response to globalization and corporate capitalism. Old-time music represents a spirit in American history that should not be forgotten and should be applied to the twenty-first-century social context