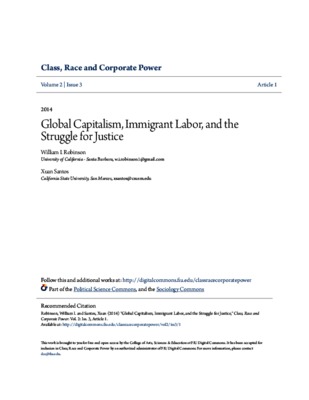 Global Capitalism, Immigrant Labor, and the Struggle for Justice

By William I. Robinson and Xuan Santos
Get PDF (417 KB)

Around the world borders are militarized, states are stepping up repressive anti-immigrant controls, and native publics are turning immigrants into scapegoats for the spiraling crisis of global capitalism. The massive displacement and primitive accumulation unleashed by free trade agreements and neo-liberal policies, as well as state and “private” violence has resulted in a virtually inexhaustible immigrant labor reserve for the global economy. State controls over immigration and immigrant labor have several functions for the system: 1) state repression and criminalization of undocumented immigration make immigrants vulnerable and deportable and therefore subject to conditions of super-exploitation, super-control and hyper-surveillance; 2) anti-immigrant repressive apparatuses are themselves ever more important sources of accumulation, ranging from private for-profit immigrant detention centers, to the militarization of borders, and the purchase by states of military hardware and systems of surveillance. Immigrant labor is extremely profitable for the transnational corporate economy; 3) the anti-immigrant policies associated with repressive state apparatuses help turn attention away from the crisis of global capitalism among more privileged sectors of the working class and convert immigrant workers into scapegoats for the crisis, thus deflecting attention from the root causes of the crisis and undermining working class unity. This article focuses on structural and historical underpinnings of the phenomenon of immigrant labor in the new global capitalist system and on how the rise of a globally integrated production and financial system, a transnational capitalist class, and transnational state apparatuses, have led to a reorganization of the world market in labor, including deeper reliance on a rapidly expanding reserve army of immigrant labor and a vicious new anti-immigrant politics. It looks at the United States as an illustration of the larger worldwide situation with regard to immigration and immigrant justice. Finally, it explores the rise of an immigrant justice movement around the world, observes the leading role that immigrant workers often play in worker’s struggles and that a mass immigrant rights movement is at the cutting edge of the struggle against transnational corporate exploitation. We call for replacing the whole concept of national citizenship with that of global citizenship as the only rallying cry that can assure justice and equality for all