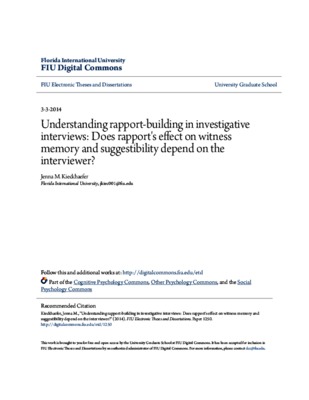 Understanding rapport-building in investigative interviews: Does rapport\u27s effect on witness memory and suggestibility depend on the interviewer?

Most investigative interviewing protocols, including the National Institute of Justice’s 1999 guidelines on collecting eyewitness evidence, recommend building rapport with cooperative witnesses to increase the quality and quantity of details obtained at recall. To date, only three published articles have empirically addressed the effects of rapport-building on adult witness memory, and all suggest an increase in witness accuracy under certain conditions. However, to our knowledge no research has addressed the importance of the investigator when building rapport and whether rapport can increase witness susceptibility to suggestive-leading questions – the aim of the current research. Specifically, this project examined the effects of change in interviewer between rapport and retrieval, and the effects of interviewer suggestion after rapport eyewitness memory accuracy. Participant witnesses (N=198) viewed a videotaped mock convenience store robbery followed by rapport-building or a standard police interview about non-crime related details (rapport manipulation). One week later all participants were interviewed about the mock crime they witnessed either by the same or a different interviewer (interviewer manipulation). All witnesses were interviewed about the mock crime using open-ended questions about the event, witnesses, suspect, and location followed by a series of specific suggestive questions containing both correct- and incorrect-leading information about the crime. Videotaped and transcribed witness reports were scored for accurate and false information by two independent raters. Findings indicated that, contrary to all hypotheses, neither rapport-building on day 1 nor change in interviewer on day 2 (one week later) manipulations resulted in significant effects on the primary accuracy dependent measures on day 2, including open-ended and suggestive-leading questions. The present study was the first to investigate the effect of rapport-building on eyewitness recall after a delay, whether changing interviewers across the investigation impacts recall, and whether rapport can act as a safeguard by inoculating witnesses against investigator-provided misinformation. These null findings further suggest that future research should disentangle the specific conditions under which rapport-building facilitates witness recall need to be disentangled in future research