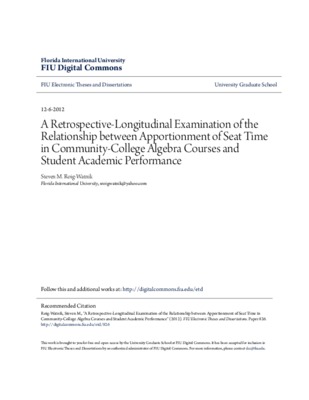 During the past decade, there has been a dramatic increase by postsecondary institutions in providing academic programs and course offerings in a multitude of formats and venues (Biemiller, 2009; Kucsera & Zimmaro, 2010; Lang, 2009; Mangan, 2008). Strategies pertaining to reapportionment of course-delivery seat time have been a major facet of these institutional initiatives; most notably, within many open-door 2-year colleges. Often, these enrollment-management decisions are driven by the desire to increase market-share, optimize the usage of finite facility capacity, and contain costs, especially during these economically turbulent times. So, while enrollments have surged to the point where nearly one in three 18-to-24 year-old U.S. undergraduates are community college students (Pew Research Center, 2009), graduation rates, on average, still remain distressingly low (Complete College America, 2011). Among the learning-theory constructs related to seat-time reapportionment efforts is the cognitive phenomenon commonly referred to as the spacing effect, the degree to which learning is enhanced by a series of shorter, separated sessions as opposed to fewer, more massed episodes. This ex post facto study explored whether seat time in a postsecondary developmental-level algebra course is significantly related to: course success; course-enrollment persistence; and, longitudinally, the time to successfully complete a general-education-level mathematics course. Hierarchical logistic regression and discrete-time survival analysis were used to perform a multi-level, multivariable analysis of a student cohort (N = 3,284) enrolled at a large, multi-campus, urban community college. The subjects were retrospectively tracked over a 2-year longitudinal period. The study found that students in long seat-time classes tended to withdraw earlier and more often than did their peers in short seat-time classes (p \u3c .05). Additionally, a model comprised of nine statistically significant covariates (all with p-values less than .01) was constructed. However, no longitudinal seat-time group differences were detected nor was there sufficient statistical evidence to conclude that seat time was predictive of developmental-level course success. A principal aim of this study was to demonstrate—to educational leaders, researchers, and institutional-research/business-intelligence professionals—the advantages and computational practicability of survival analysis, an underused but more powerful way to investigate changes in students over time