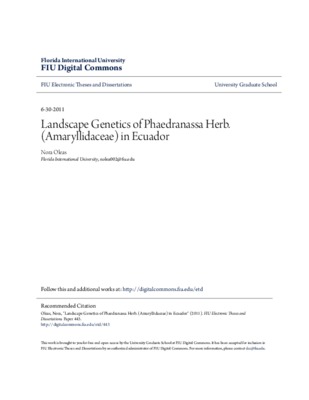 Speciation can be understood as a continuum occurring at different levels, from population to species. The recent molecular revolution in population genetics has opened a pathway towards understanding species evolution. At the same time, speciation patterns can be better explained by incorporating a geographic context, through the use of geographic information systems (GIS). Phaedranassa (Amaryllidaceae) is a genus restricted to one of the world’s most biodiverse hotspots, the Northern Andes. I studied seven Phaedranassa species from Ecuador. Six of these species are endemic to the country. The topographic complexity of the Andes, which creates local microhabitats ranging from moist slopes to dry valleys, might explain the patterns of Phaedranassa species differentiation. With a Bayesian individual assignment approach, I assessed the genetic structure of the genus throughout Ecuador using twelve microsatellite loci. I also used bioclimatic variables and species geographic coordinates under a Maximum Entropy algorithm to generate distribution models of the species. My results show that Phaedranassa species are genetically well-differentiated. Furthermore, with the exception of two species, all Phaedranassa showed non-overlapping distributions. Phaedranassa viridiflora and P. glauciflora were the only species in which the model predicted a broad species distribution, but genetic evidence indicates that these findings are likely an artifact of species delimitation issues. Both genetic differentiation and non-overlapping geographic distribution suggest that allopatric divergence could be the general model of genetic differentiation. Evidence of sympatric speciation was found in two geographically and genetically distinct groups of P. viridiflora. Additionally, I report the first register of natural hybridization for the genus. The findings of this research show that the genetic differentiation of species in an intricate landscape as the Andes does not necessarily show a unique trend. Although allopatric speciation is the most common form of speciation, I found evidence of sympatric speciation and hybridization. These results show that the processes of speciation in the Andes have followed several pathways. The mixture of these processes contributes to the high biodiversity of the regio