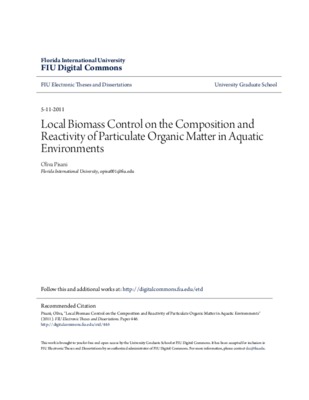 Freshwater ecosystems have been recognized as important components of the global carbon cycle, and the flux of organic matter (OM) from freshwater to marine environments can significantly affect estuarine and coastal productivity. The focus of this study was the assessment of carbon dynamics in two aquatic environments, namely the Florida Everglades and small prairie streams in Kansas, with the aim of characterizing the biogeochemistry of OM. In the Everglades, particulate OM (POM) is mostly found as a layer of flocculent material (“floc”). While floc is believed to be the main energy source driving trophic dynamics in this oligotrophic wetland, not much is known about its biogeochemistry. The objective of this study was to determine the origin/sources of OM in floc using biomarkers and pigment-based chemotaxonomy to assess specific biomass contributions to this material, on a spatial (freshwater marshes vs. mangrove fringe) and seasonal (wet vs. dry) scales. It was found that floc OM is derived from the local vegetation (mainly algal components and macrophyte litter) and its composition is controlled by seasonal drivers of hydrology and local biomass productivity. Photo-reactivity experiments showed that light exposure on floc resulted in photo-dissolution of POC with the generation of significant amounts of both dissolved OM (DOM) and nutrients (N & P), potentially influencing nutrient dynamics in this ecosystem. The bio-reactivity experiments determined as the amount and rate of CO2 evolution during incubation were found to vary on seasonal and spatial scales and were highly influenced by phosphorus limitation. Not much is known on OM dynamics in small headwater streams. The objective of this study was to determine carbon dynamics in sediments from intermittent prairie streams, characterized by different vegetation cover for their watershed (C4 grasses) vs. riparian zone (C3 plants). In this study sedimentary OM was characterized using a biomarker and compound specific carbon stable isotope approach. It was found that the biomarker composition of these sediments is dominated by higher plant inputs from the riparian zone, although inputs from adjacent prairie grasses were also apparent. Conflicting to some extent with the River Continuum Concept, sediments of the upper reaches contained more degraded OM, while the lower reaches were enriched in fresh material deriving from higher plants and plankton sources as a result of hydrological regimes and particle sorting