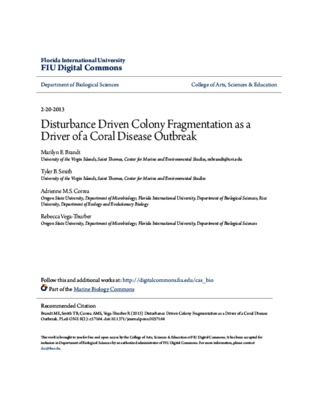 In September of 2010, Brewer\u27s Bay reef, located in St. Thomas (U.S. Virgin Islands), was simultaneously affected by abnormally high temperatures and the passage of a hurricane that resulted in the mass bleaching and fragmentation of its coral community. An outbreak of a rapid tissue loss disease among coral colonies was associated with these two disturbances. Gross lesion signs and lesion progression rates indicated that the disease was most similar to the Caribbean coral disease white plague type 1. Experiments indicated that the disease was transmissible through direct contact between colonies, and five-meter radial transects showed a clustered spatial distribution of disease, with diseased colonies being concentrated within the first meter of other diseased colonies. Disease prevalence and the extent to which colonies were bleached were both significantly higher on unattached colony fragments than on attached colonies, and disease occurred primarily on fragments found in direct contact with sediment. In contrast to other recent studies, disease presence was not related to the extent of bleaching on colonies. The results of this study suggest that colony fragmentation and contact with sediment played primary roles in the initial appearance of disease, but that the disease was capable of spreading among colonies, which suggests secondary transmission is possible through some other, unidentified mechanism