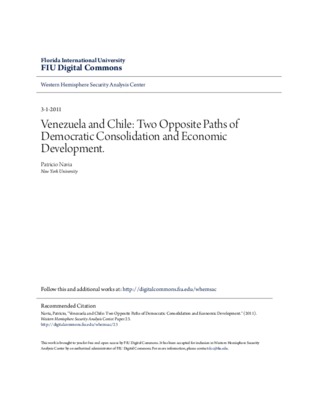 Venezuela and Chile: Two Opposite Paths of Democratic Consolidation and Economic Development.

In the past 20 years, Chile and Venezuela have followed divergent paths of democratic and economic development. When the Cold War ended, Venezuela was one of the few Latin American countries where democracy had survived the authoritarian wave of the 1960 and 1970s. Heralded in the late 1980s as the most stable democracy and one of the most developed and globalized economies in the region, Venezuela has since experienced deterioration of democratic institutions, political polarization, economic stagnation, and instability. In contrast, Chile has experienced a democratic renaissance since 1990. Rapid economic growth, an increasingly efficient public sector, significant reductions in poverty, and improvements in social programs have all made Chile a regional leader in democratic consolidation and sustainable development. Chile emerges as a success story and Venezuela as a country lagging behind in terms of making progress in economic development and poverty reduction. While Chile has developed a democratic system based on institutions, Venezuela has seen its democracy evolve towards increasing concentration of power on the hands of President Hugo Chávez