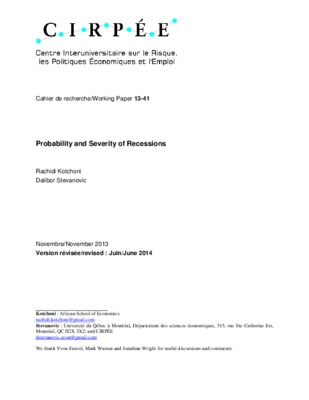 Probability and Severity of Recessions

By Rachidi Kotchoni and Dalibor Stevanovic
Get PDF (723 KB)

This paper advances beyond the prediction of the probability of a recession by also considering its severity in terms of output loss and duration. First, Probit models are used to estimate the probability of a recession at period t + h from the information available at period t. Next, a Vector Autoregression (VAR) augmented with diffusion indices and an inverse Mills ratio (IMR) is fitted to selected measures of real economic activity. The latter model is used to generate two forecasts: an average forecast, and a forecast under pessimistic assumption that a recession occurs at the forecast horizon. The severity of recessions is then predicted as the gap between these two forecasts. Finally, a zero-inflated Poisson model is fitted to historical durations of recessions. Our empirical results suggest that U.S. recessions are fairly predictable, both in terms of occurrence and severity. Out-of-sample experiments suggest that the inclusion of the IMR in the VAR model significantly improves its forecasting performance