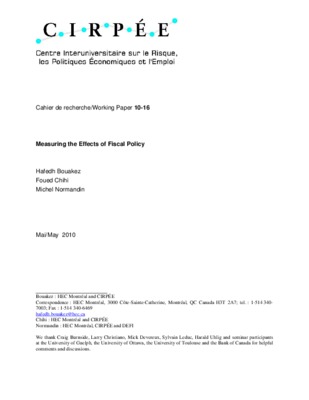 Measuring the effects of discretionary fiscal policy is both difficult and controversial, as some explicit or implicit identifying assumptions need to be made to isolate exogenous and unanticipated changes in taxes and government spending. Studies based on structural vector autoregressions typically achieve identification by restricting the contemporaneous interaction of fiscal and non-fiscal variables in a rather arbitrary way. In this paper, we relax those restrictions and identify fiscal policy shocks by exploiting the conditional heteroscedasticity of the structural disturbances. We use this methodology to evaluate the macroeconomic effects of fiscal policy shocks in the U.S. before and after 1979. Our results show substantive differences in the economy’s response to government spending and tax shocks across the two periods. Importantly, we find that increases in public spending are, in general, more effective than tax cuts in stimulating economic activity. A key contribution of this study is to provide a formal test of the identifying restrictions commonly used in the literature