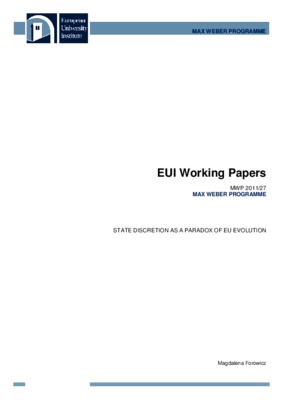 State Discretion as a Paradox of EU Evolution

By Magdalena FOROWICZ
Get PDF (330 KB)

The notion of State discretion is a fundamental concept for the determination of powers and the effective functioning of regional and international legal systems. It is an inherently controversial notion in a system such as the European Union, as it implies that a freedom of decision and interpretation is left to Member States. State discretion disturbs and fosters diversity, thereby potentially threatening the coherent development and harmonisation of EU law and policies. Nonetheless, as part of an expanding EU, it becomes increasingly difficult to build consensus among States with varied legal, economic and political traditions. The increasingly pluralist nature of the EU membership and regime often requires patience and compromise. In this context, the notion of State discretion could play an important role in improving the efficiency of EU law and relations between EU Institutions and Member States. This Working Paper envisages State discretion as process which is defined in the ex ante legislative phase and the ex post judicial phase. As an alternative to the principle of subsidiarity, this paper proposes a different and more comprehensive framework for interpreting relations between Member States and EU Institutions. It is also part of a longer study focusing on several areas of EU Law