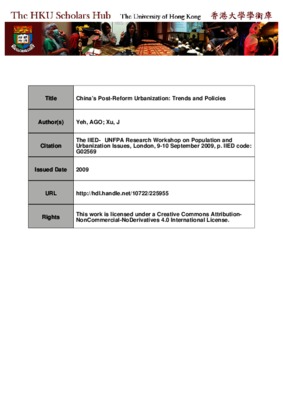 Since the adoption of economic reform policy in 1978, several trends are changing the Chinese society. Chief among these is the rapid transition to an urbanized country. Not only is more than 1/3 the country’s population now living in cities and towns but the remaining is becoming increasingly dependent on cities and towns for its economic survival and livelihood. Chinese experts predict that by 2050, urban population is likely to reach 1.0-1.1 billion with urbanization level soaring up to over 75 percent and urban sector contributing to over 95 percent of the national economy. Accordingly, more than 600 million Chinese people will shift from rural areas to urban districts by 2050. Furthermore, projections shows that by 2050, there are likely to be 50 ultra-large cities with population of more than two million, some 150 big cities, 500 medium-sized cities and 1,500 small cities. While these figures are predictable, other forces such as globalization and regional integration will reinforced the role of cities as centers of production, consumption and social and political change. This chapter aims to unravel such changes and to examine issues related to these developments.postprintThe IIED‐UNFPA Research Workshop on Population and Urbanization Issues, London, 9-10 September 2009, IIED code: G0256