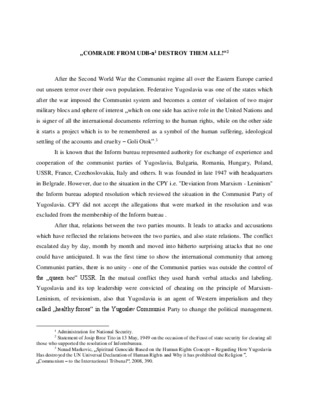 Comrade from UDB-а, destroy them all!

By Todor Cepreganov and Sonja Nikolova
Get PDF (453 KB)

The total number of persons who were sent to Goli Otok is not yet verified, but according to recent studies it is assumed that to Goli Otok and other camps have gone from 40 to 60,000 of which 3,800 prisoners died in the camps. On one or more days were imprisoned from 200,000 to 250,000, and in socialist Yugoslavia of about 17.3 million people were persecuted approximately 1,000,000 citizens. It does not apply only to the prisoners but we have to have in mind the fate of many families who were evicted from their houses, confiscation of property, dismissal, forced cooperation, rape, breaking up the marital community, eviction or relocation, changing profession and disabling to thrive. It was the way how Josip Broz Tito conducted the sweep of his party opponents - the old Communists who were participating in the labor movement between the two world wars and who for decades have been linked to the revolutionary movement and the Communist Party of the USSR and communist who are against Tito’s policy. In our article we will reflect on the fate of the prisoners of R. Macedonia, who under the sign of „informborovci“ – opponents of Tito’s policy finished to Goli Otok, and the fate of their families in the period until 1989 through memories of the victims