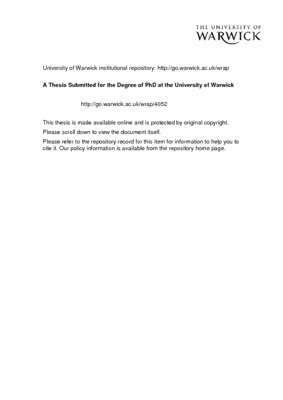 Orphans : childhood alienation and the idea of the self in Rousseau, Wordsworth and Mary Shelley

This thesis explores representations of the self in Rousseau's Émile (1762). Wordsworth's The Prelude (1805) and Mary Shelley's Frankenstein (1818). It uses the idea of 'the orphan' not in a strictly literal sense, but in order to explore representations of the self that stress an individual's autonomy, and thus tend to minimise the importance of society and cultural inheritance to the formation of the self. Crucial to understanding this model of the self is the idea found in Émile of autonomous natural growth: the idea that a child brought up in relative seclusion in the countryside, and offered the minimum of assistance from its adult carers, is capable of developing naturally, seemingly under its own volition. Rousseau believed that such a child would have an authenticity lacking in those children unduly contaminated by external cultural factors. The model of autonomous growth proposed by Rousseau relates to the discourse of possessive individualism and to the idea of the self-made man, beholden to no one, and free to make his own way in the world. This model of the self influenced Wordsworth and Mary Shelley, who both respond to and react against Rousseau's thinking. The thesis explores the contradictions implicit in this model of self-formation. It stresses the impossibility of keeping children free from external human factors, looking at the way that physical and mental development is necessarily accompanied by a child's acculturation, for example in relation to language acquisition. It explores the complications that arise from this in relation to questions of autonomy. The thesis highlights the sense of alienation and the emotional cost experienced by the child who is brought up to perceive itself as set apart from 'others', as exemplified by the loneliness felt by the most isolated of the 'children' under discussion, Victor Frankenstein's creation. In contrast to the discourse of possessive individualism this study persists in treating the self as historically situated, and inhabited by the culture that surrounds it