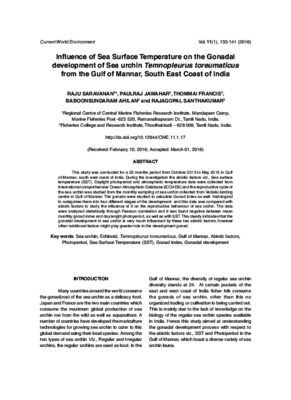 Influence of Sea Surface Temperature on the Gonadal development of Sea urchin Temnopleurus toreumaticus from the Gulf of Mannar, South East Coast of India

This study was conducted for a 20 months period from October 2013 to May 2015 in Gulf of Mannar, south east coast of India. During the investigation the abiotic factors viz., Sea surface temperature (SST), Daylight photoperiod and atmospheric temperature data were collected from International comprehensive Ocean Atmospheric Database (ICOADS) and the reproductive cycle of the sea urchin was studied from the monthly sampling of sea urchin collected from Vedalai landing centre in Gulf of Mannar. The gonads were studied to calculate Gonad index as well histological to categories them into four different stages of the development and this data was compared with abiotic factors to study the influence of it on the reproductive behaviour of sea urchin. The data were analyzed statistically through Pearson correlation and it was found negative between mean monthly gonad index and day length photoperiod, as well as with SST. This clearly indicates that the gonadal development in sea urchin is very much influenced by these two abiotic factors; however other nutritional factors might play greater role in the development gonad