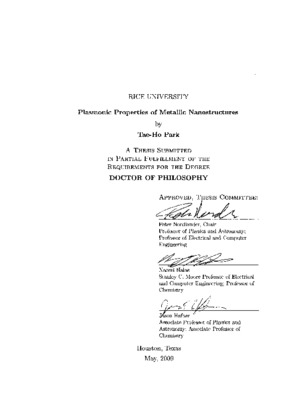 Based on the plasmon hybridization theory, this thesis provides physical understanding of the plasmonic nature of metallic nanostructures. Metallic films and nanoshell particles exhibit bonding and antibonding plasmon resonances formed by hybridization of plasmon resonances associated with the two surfaces confining the metal. For both structures the lower energy bonding plasmon resonance is characterized by symmetric alignment of the charge densities. This thesis presents a physically intuitive explanation for why the repulsive symmetric charge alignment results in a low energy bonding plasmon. It also shows that the plasmon dispersion for a planar thin film can be obtained from the plasmon resonances of a metallic nanoshell in the limit of infinite radius. After clarifying the nature of plasmon modes of thin metal films, the optical properties of an individual nanohole in a thin metallic film are examined theoretically and experimentally. Subwavelength holes, one of the most important structures in nanophotonics, give rise to extraordinary transmission when patterened in arrays. The individual holes provided a site for excitation of the underlying thin film surface plasmons. It is shown that both hole diameter and film thickness determine the energy of the optical resonance. I also show that the hole plasmon resonance (HPR) depends strongly on the polarization of the incident light due to the optical coupling between antibonding film plasmon modes and perpendicularly polarized light to the film surface. The hybridization scheme is extended to the coherent coupling between the localized plasmons of a nanoshell and the excitons of J-aggregate molecules adsorbed on the metallic nanoparticle surface. Timing the nanoshell plasmon resonant energies across the exciton energy of the J-aggregate obtains hybridized energies for plasmon-exciton coupling. The coupling strength depends on the specific plasmon mode of the nanoshell coupled to the exciton mode of the J-aggregate. Experimental data of optical extinction spectra is reproduced by using Mie theory, and the plasmon-exciton coupling of nanoshell/J-aggregate complexes systems can be quantitatively as well as qualitatively understood based on Gans theory. The plasmon hybridization theory can be also applied to various shapes of nanopartides using particular coordinate systems. This thesis investigate the optical properties of metallic toroidal nanoparticles using the plasmon hybridization theory. For incident light polarized in the plane of the torus, a low energy dipolar plasmon resonance and a high energy resonance contributed by several higher order torus modes appear in the optical spectra. The low energy node is highly tunable with the aspect ratio in terms of two characteristic radii of tori. For perpendicular polarization, the plasmon resonance is weakly dependent on the aspect ratio because the excited higher order torus modes are closely spaced. Optical spectra calculated by plasmon hybridization method show excellent agreement with numerical finite difference time domain calculation results