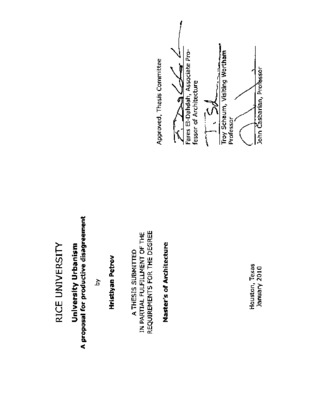 By Hristiyan Petrov
Get PDF (1 MB)

Monumentality can be seen as a culmination of consensus. However, when consensus is not present, furthermore, when disagreements construct the dialog, the architecture that mediates this dialog becomes a monument itself. Walls, dividing territories and cities around the world, have become dreadful monuments within our collective imaginary. Imposed separation lines, they reinforce the differences between ethnic groups and become long-term markers of a failed dialogue. This thesis takes a spatialized model of disagreement, the university, and constructs a new urban typology able to mediate conflicted zones through notions of programmed monumentality. It challenges a border condition and actively erodes a hard line within a city by strategic insertions of "encounter-platforms" for the two communities. Nicosia, the capital of Cyprus has been scarred by historical events that have created a series of unique conditions throughout the city fabric. A swatch of land running from East to West and varying in width between 3 m and 18 m has been imposed to split the city in two ethnically uniform halves. This thesis proposes an International Erasmus University inside the Green Line breaking the four-decade-old stalemate between the two communities. With students acting as effective diplomats, the exchange of ideas and opinions will aim to dismantle the firmly established psychological division between the two communities. The project creates a series of urban and architectural interventions in the city in order to stitch the unproductive separation of the territory, by proposing a series of programmatic nodes in place of the original market street. The new typology reinvents the city center and implements new points of interaction while activating the decayed urban fabric around the Green Line. The demilitarized zone is then turned into a park for the city and the university which facilitates the ease of pedestrian traffic from the two originally divided cities