Most existing terahertz imaging systems are generally limited by slow image acquisition due to mechanical raster scanning. Other systems using focal plane detector arrays can acquire images in real time, but are either too costly or limited by low sensitivity in the terahertz frequency range. To design faster and more cost-effective terahertz imaging systems, the first part of this thesis proposes two new terahertz imaging schemes based on compressive sensing (CS). Both schemes can acquire amplitude and phase-contrast images efficiently with a single-pixel detector, thanks to the powerful CS algorithms which enable the reconstruction of N-by- N pixel images with much fewer than N2 measurements. The first CS Fourier imaging approach successfully reconstructs a 64x64 image of an object with pixel size 1.4 mm using a randomly chosen subset of the 4096 pixels which defines the image in the Fourier plane. Only about 12% of the pixels are required for reassembling the image of a selected object, equivalent to a 2/3 reduction in acquisition time. The second approach is single-pixel CS imaging, which uses a series of random masks for acquisition. Besides speeding up acquisition with a reduced number of measurements, the single-pixel system can further cut down acquisition time by electrical or optical spatial modulation of random patterns. In order to switch between random patterns at high speed in the single-pixel imaging system, the second part of this thesis implements a multi-pixel electrical spatial modulator for terahertz beams using active terahertz metamaterials. The first generation of this device consists of a 4x4 pixel array, where each pixel is an array of sub-wavelength-sized split-ring resonator elements fabricated on a semiconductor substrate, and is independently controlled by applying an external voltage. The spatial modulator has a uniform modulation depth of around 40 percent across all pixels, and negligible crosstalk, at the resonant frequency. The second-generation spatial terahertz modulator, also based on metamaterials with a higher resolution (32x32), is under development. A FPGA-based circuit is designed to control the large number of modulator pixels. Once fully implemented, this second-generation device will enable fast terahertz imaging with both pulsed and continuous-wave terahertz sources 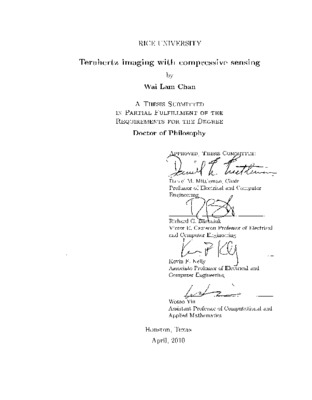