This thesis introduces and applies model reduction techniques to problems associated with simulation of realistic single neurons. Neurons have complicated dendritic structures and spatially-distributed ionic kinetics that give rise to highly nonlinear dynamics. However, existing model reduction methods compromise the geometry, and thus sacrifice the original input-output relationship. I demonstrate that linear and nonlinear model reduction techniques yield systems that capture the salient dynamics of morphologically accurate neuronal models and preserve the input-output maps while using significantly fewer variables than the full systems. Two main dynamic regimes characterize the voltage response of a neuron, and I demonstrate that different model reduction techniques are well-suited to each regime. Small perturbations from the neuron's rest state fall into the subthreshold regime, which can be accurately described by a linear system. By applying Balanced Truncation (BT), a model reduction technique for general linear systems, I recover subthreshold voltage dynamics, and I provide an efficient Iterative Rational Krylov Algorithm (IRKA), which makes large problems of interest tractable. However, these approximations are not valid once the input to the neuron is sufficient to drive the voltage into the spiking regime, which is characterized by highly nonlinear behavior. To reproduce spiking dynamics, I use a proper orthogonal decomposition (POD) to reduce the number of state variables and a discrete empirical interpolation method (DEIM) to reduce the complexity of the nonlinear terms. The techniques described above are successful, but they inherently assume that the whole neuron is either passive (linear) or active (nonlinear). However, in realistic cells the voltage response at distal locations is nearly linear, while at proximal locations it is very nonlinear. With this observation, I fuse the aforementioned models together to create a reduced coupled model in which each reduction technique is used where it is most advantageous, thereby making it possible to more accurately simulate a larger class of cortical neurons 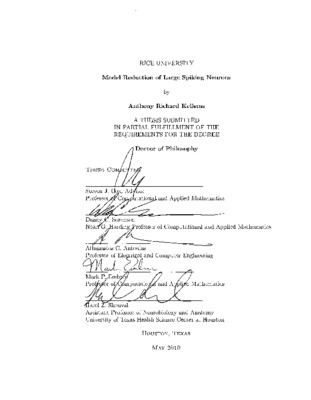