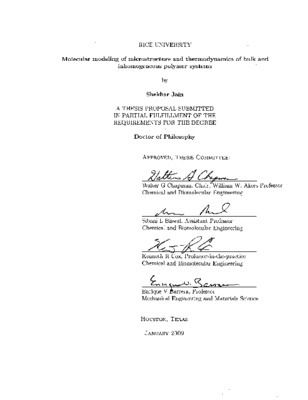 By Shekhar Jain
Get PDF (8 MB)

Modeling of thermodynamics and microstructure of polymer systems is important in their production, processing, and applications. Success in modeling these systems is contingent upon the ability of the molecular model to describe specific interactions, and capture the size and shape effects. Molecular models for polymers are divided into areas that separately focus on the bulk and inhomogeneous aspects of polymer systems. In current work, a new equation of state (EOS) based on Wertheim's thermodynamic perturbation theory (TPT1) has been developed for bulk polymer systems. Treating the polymeric fluid as a fluid mixture of associating spheres in the limit of complete association, the EOS more accurately accounts for the architecture and interactions of the polymer molecules. The EOS accurately predicts the phase behavior of bulk polymer systems over the whole range of polymer weight fractions in comparison to previous theoretical approaches, and the improvement is significant near the critical region. For inhomogeneous polymer systems, a new density functional theory (DFT) based on TPT1 has been developed. The DFT derived in terms of the segment density, offers accuracy comparable to the previous molecular density-based, simulation-dependent theories at a computational expense comparable to atomic DFTs. Comparisons with molecular simulations for the microstructure of the heteronuclear (model lipids and block copolymers) and star-like branched polymer melts near a surface, demonstrate the capability of the theory to accurately capture the effects of the polymer chain architecture, segment-segment, and segment-surface interactions. The DFT has been applied to analyze the lamellar morphologies of symmetric diblock copolymers in bulk melts and ultra-thin films confined between two surfaces. Effects of the chain length of the copolymer, incompatibility between the two blocks, surface-block interactions, and film thickness on the microstructure are investigated. Finally, the DFT has also been applied to predict the microstructure of the monolayers formed by grafted polymers (on a planar surface) and the force of interaction between two such monolayers. The theory successfully accounts for the difference in the segment sizes of the grafted polymer and the free polymer solvent. This has not been investigated with the previous theoretical approaches for grafted polymers