Integration of sight, hearing and touch in human cerebral cortex

While each individual sensory modality provides us with information about a specific aspect about our environment, our senses must be integrated for us to interact with the environment in a meaningful way. My thesis describes studies of the interactions between somatosensation, vision and audition using functional Magnetic Resonance Imaging (fMRI) of normal human subjects as the primary method. In order to study somatosensation with fMRI we first built an MRI-compatible tactile-stimulation apparatus. This apparatus was then used for four separate studies. In the first study, we investigated tactile responses in lateral occipital lobe, a brain region traditionally considered "visual" cortex. We found that visual area MST, but not visual area MT, responded to tactile stimulation. In the second study we investigated a possible homologue to a macaque multisensory area that integrates visual, auditory and tactile information, called the Superior Temporal Polysensory area (STP). We found responses to tactile stimuli co-localized with auditory and visual responses in posterior superior temporal sulcus. This is likely to be a human homologue to macaque STP. In the third study, we used Multi Voxel Pattern Analysis (MVPA) to demonstrate that this homologue of macaque STP (along with traditional "somatosensory" areas) can predict the location of tactile stimulation from fMRI data. In the fourth study we used psychophysical techniques to analyze the effects of auditory stimuli on tactile perception. We found that auditory stimuli can influence detection, frequency perception, and the perception of the spatial location of vibrotactile stimuli. Two additional projects are also briefly described. The results of an effort to develop an MRI compatible Transcranial Magnetic Stimulation (TMS) device are included. Also a project I worked on during my summer internship in which I debugged a system capable of both stimulating and recording from cortical tissue at the same time is also discussed 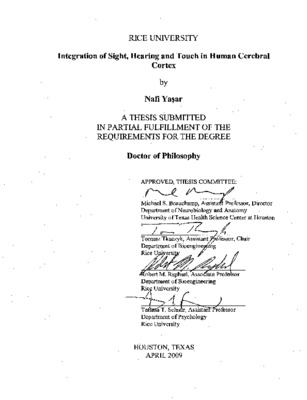