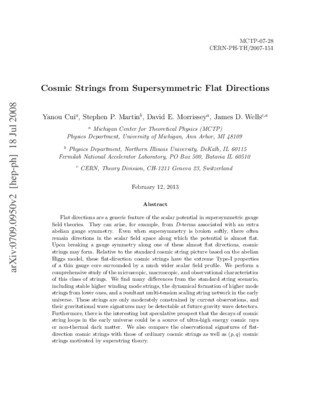 Flat directions are a generic feature of the scalar potential in supersymmetric gauge field theories. They can arise, for example, from D-terms associated with an extra abelian gauge symmetry. Even when supersymmetry is broken softly, there often remain directions in the scalar field space along which the potential is almost flat. Upon breaking a gauge symmetry along one of these almost flat directions, cosmic strings may form. Relative to the standard cosmic string picture based on the abelian Higgs model, these flat-direction cosmic strings have the extreme Type-I properties of a thin gauge core surrounded by a much wider scalar field profile. We perform a comprehensive study of the microscopic, macroscopic, and observational characteristics of this class of strings. We find many differences from the standard string scenario, including stable higher winding mode strings, the dynamical formation of higher mode strings from lower ones, and a resultant multi-tension scaling string network in the early universe. These strings are only moderately constrained by current observations, and their gravitational wave signatures may be detectable at future gravity wave detectors. Furthermore, there is the interesting but speculative prospect that the decays of cosmic string loops in the early universe could be a source of ultra-high energy cosmic rays or non-thermal dark matter. We also compare the observational signatures of flat-direct ion cosmic strings with those of ordinary cosmic strings as well as (p,q) cosmic strings motivated by superstring theory