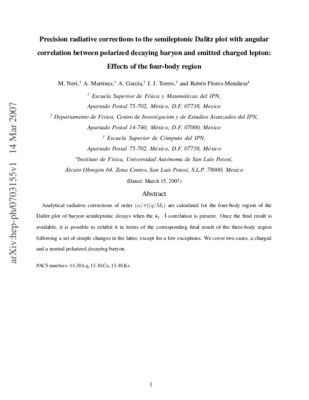 By M Neri, R Flores-Mendieta, A García, A Martínez and J J Torres
Get PDF (74 KB)

Analytical radiative corrections of order (alpha/pi)(q/M) are calculated for the four-body region of the Dalitz plot of baryon semileptonic decays when the s1.l correlation is present. Once the final result is available, it is possible to exhibit it in terms of the corresponding final result of the three-body region following a set of simple changes in the latter, except for a few exceptions. We cover two cases, a charged and a neutral polarized decaying baryon