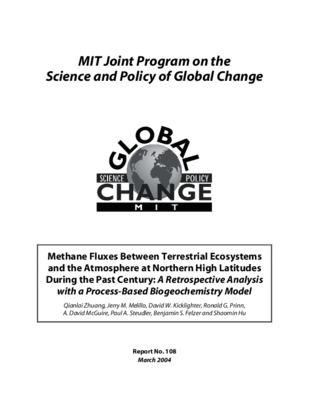 Methane Fluxes Between Terrestrial Ecosystems and the Atmosphere at Northern High Latitudes During the Past Century: A retrospective analysis with a process-based biogeochemistry model

Abstract in HTML and technical report in PDF available on the Massachusetts Institute of Technology Joint Program on the Science and Policy of Global Change website (http://mit.edu/globalchange/www/).We develop and use a new version of the Terrestrial Ecosystem Model (TEM) to study how rates of methane (CH4) emissions and consumption in high-latitude soils of the Northern Hemisphere have changed over the past century in response to observed changes in the region’s climate. We estimate that the net emissions of CH4 (emissions minus consumption) from these soils have increased by an average 0.08 Tg CH4 per year during the 20th century. Our estimate of the annual net emission rate at the end of the century for the region is 51 Tg CH4 per year. Russia, Canada, and Alaska are the major CH4 regional sources to the atmosphere; responsible for 64%, 11%, and 7% of these net emissions, respectively. Our simulations indicate that large inter-annual variability in net CH4 emissions occurred over the last century. If CH4 emissions from the soils of the pan-Arctic region respond to future climate changes as our simulations suggest they have responded to observed climate changes over the 20th century, a large increase in high latitude CH4 emissions is likely and could lead to a major positive feedback to the climate system.This study was supported by a NSF biocomplexity grant (ATM-0120468), the NASA Land Cover and Land Use Change Program (NAG5-6257), and by funding from MIT Joint Program on the Science and Policy of Global Change, which is supported by a consortium of government, industry and foundation sponsors