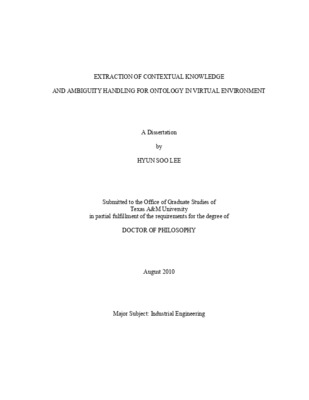 This dissertation investigates the extraction of knowledge from a known environment. Virtual ontology – the extracted knowledge – is defined as a structure of a virtual environment with semantics. While many existing 3D reconstruction approaches can generate virtual environments without structure and related knowledge, the use of Metaearth architecture is proposed as a more descriptive data structure for virtual ontology. Its architecture consists of four layers: interactions and relationships between virtual components can be represented in the virtual space layer; and the library layers contribute to the design of large-scale virtual environments with less redundancy; and the mapping layer links the library layer to the virtual space layer; and the ontology layer functions as a context for the extracted knowledge. The dissertation suggests two construction methodologies. The first method generates a scene structure from a 2D image. Unlike other scene understanding techniques, the suggested method generates scene ontology without prior knowledge and human intervention. As an intermediate process, a new and effective fuzzy color-based over-segmentation method is suggested. The second method generates virtual ontology with 3D information using multi-view scenes. The many ambiguities in extracting 3D information are resolved by employing a new fuzzy dynamic programming method (FDP). The hybrid approach of FDP and 3D reconstruction method generates more accurate virtual ontology with 3D information. A virtual model is equipped with virtual ontology whereby contextual knowledge can be mapped into the Metaearth architecture via the proposed isomorphic matching method. The suggested procedure guarantees the automatic and autonomous processing demanded in virtual interaction analysis with far less effort and computational time