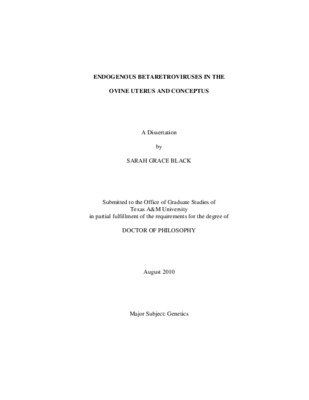 Endogenous Betaretroviruses in the Ovine Uterus and Conceptus

Endogenous retroviruses (ERVs) comprise a significant portion of the genome of all mammals and have been implicated in placental development in multiple species. The ovine genome contains approximately 27 copies of endogenous betaretroviruses (enJSRVs) that are related to the exogenous Jaagsiekte sheep retrovirus (JSRV), an oncogenic retrovirus tropic to the lung. The enJSRV loci are abundantly expressed in the female reproductive tract and the conceptus, and they are essential to conceptus development. Studies were conducted to determine: 1) the effect of exogenous progesterone administration on conceptus development after loss of enJSRV Env; 2) the specific enJSRV env expressed in the developing conceptus; and 3) if the uterus produces enJSRV viral particles that are capable of transducing the conceptus. Study One determined the effects of exogenous progesterone on development of the conceptus in which enJSRV Env was ablated. Despite rescuing conceptus survival, the conceptuses were morphologically fragile and had reduced binucleate cell (BNC) numbers. These results suggest that mononuclear trophectoderm cell (MTC) proliferation and differentiation is dependent on enJSRV Env, even in a uterine environment supported by exogenous progesterone. Study Two assessed the enJSRV loci transcribed in the ovine conceptus during elongation before (day 13) and after (day 18) onset of BNC differentiation. The most represented loci in both day 13 and day 18 conceptuses encoded truncated Env proteins that did not contain membrane-spanning domains. Conceptuses from both time points contained evidence of the transcription of full-length, biologically active enJSRV Env, as well as completely intact proviral loci with the ability to produce viral particles in vitro. Study Three utilized a transpecies embryo transfer experiment to determine if the intact enJSRVs loci could produce viral particles in vivo. The presence of enJSRV viral particles in the uterus was confirmed, as was their ability to transduce the conceptus. Collectively, these studies provide evidence of truncated Env proteins, intact biologically active Env proteins, and enJSRVs viral particles within the ovine uterus and conceptus that are necessary to stimulate proliferation and differentiation of MTCs even in a uterine environment supported by exogenous progesterone