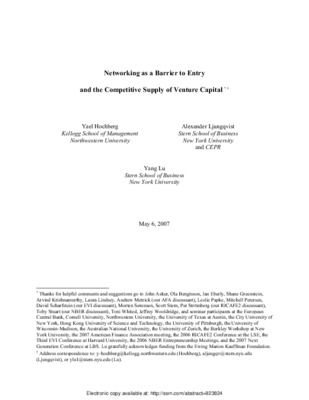 We examine whether networks among incumbent venture capital firms help restrict entry into local VC markets in the U.S., thus improving VCs’ bargaining power over entrepreneurs. We show that VC markets with more extensive networking among the incumbent players experience less entry. The effect is sizeable economically and appears robust to plausible endogeneity concerns. Entry is accommodated if the entrant has established relationships with a target-market incumbent in its own home market. In turn, incumbents react strategically to an increased threat of entry, in the sense that they freeze out any incumbent that builds a relationship with a potential entrant. Finally, companies seeking venture capital raise money on worse terms in more densely networked markets while increased entry is associated with higher valuations