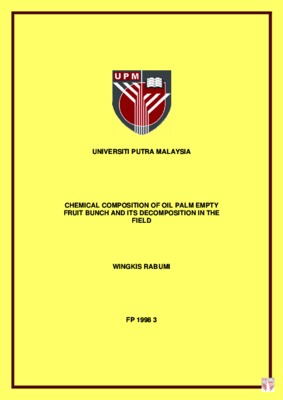 In palm oil milling process, a large quantity of stripped or empty fruit bunch (EFB) is produced and have been used for mulching. Research work was mainly on oil palm yield response to EFB application in field trials. Very little data and information were documented regarding EFB decomposition and nutrient release and effect on the soil characteristics. Thus, this study was conducted with the aim of determining the composition of EFBs from different palm of different ages and investigating EFB decomposition and nutrient release in the field over a 1 cycle EFB application period. For the EFB composition study, ten EFBs from different ages were taken for analyses from the Dusun Durian estate in Banting, Selangor Darul Ehsan. The initial fresh fruit bunches ( FFBs) were chosen from palms of eight, twelve and eighteen years old ( 10 EFBs from each age group ). The fruitlets were removed, and the EFBs were analysed for the chemical composition. A batch of 10 FFBs were also taken from the mill ( after processing ) for comparison. The EFBs were analysed for organic and nutrient composition. A field experiment was then conducted in the Tanah Merah Estate, Negeri Sembilan for about 11 months to investigate the decomposition process of EFB and nutrient release in a one application cycle. The treatments involved in this study were (i) Chemical application (fertiliser) or the control, (ii) EFB application alone, (iii) EFB and chemical fertiliser application (EFB + fertiliser). The treatments were given just after planting. Effect of the EFB application on the soil characteristics was also studied. Six pahns were randomly selected from each treatment plot. The EFB at a rate of 170 kg/palm, were placed in a circle, around the base of the young oil palm. Recording of EFB fresh weight and sampling of EFB tissue were done every 4 weeks for analyses of nutrient contents. Soil samples were taken collected every 1-2 months for analyses of mineral N and other soil characteristics