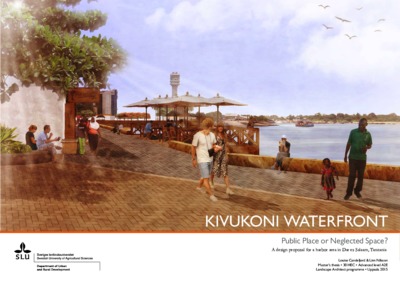 By Louise Candefjord and Linn Nilsson
Get PDF (18 MB)

Urbanization is occurring faster in Sub-Saharan Africa than anywhere else in the world (Africa Research Institute 2012, p. 1). The World Bank (2012b, pp. 181-182) states that Dar es Salaam is one of the fastest growing cities in Sub-Saharan Africa with an annual population growth rate of about 8 percent. Due to strained resources and incoherent governance the Dar es Salaam City Council is not able to provide basic urban services for the residents (UN-HABITAT 2009, p. 9). As a result, the urban environment is degraded and urban poverty increases (The World Bank 2002, p. 6). Buildings, roads and other services are prioritized in the planning process in many cities in developing countries, which exterminates green spaces (Mng’ong’o 2005, p. 6). This is also the case in Dar es Salaam, where green spaces are disappearing rapidly. The city center, referred to as the Central Business District, is characterized by a stressful city pulse of congestions, traffic jams and business people being an overrepresented target group. There is a lack of formal public spaces in the city center where people can elude the stressful city pulse, relax and recharge their batteries. What is interesting is that right in the Central Business District, in the exact area where Dar es Salaam was once founded, is an unplanned beach area known as Kivukoni Waterfront. The waterfront stretch is about one kilometer and is situated in a bay between two ferry terminals which act as major nodes. There are also several major landmarks adjacent, which mean a large amount of people are moving in this area. Kivukoni Waterfront is earmarked and mentioned as a site that should be developed as a public space for recreational purposes in the strategic document Dar es Salaam Central Area Redevelopment Plan and in the current master plan Dar es Salaam Master Plan 2012-2032. However, most parts of the waterfront are inaccessible today due to steep slopes and dense vegetation. Further, the area is littered and polluted, there are restaurant facilities of poor standard and homeless people are moving in the area, making it unhealthy and insecure. This thesis contains a design proposal of how the waterfront can be transformed into a public space, with the objectives of optimizing accessibility for everyone and increasing safety. The design is based on three main keys: connect, concentrate and commit, which help to enhance the existing strengths of the waterfront and address its weaknesses. We suggested five main destinations of different characters and activities, and a continuous beach promenade that acts as a spine by connecting the destinations and the waterfront with existing walkways and roads. The design language is a mix of organic shapes inspired by the ocean waves and strict shapes inspired by the urban landscape of the city center. If well-designed and wellfunctioning, the waterfront can have several positive impacts on the Central Business District and Dar es Salaam in general, which in turn can improve the well-being of many people