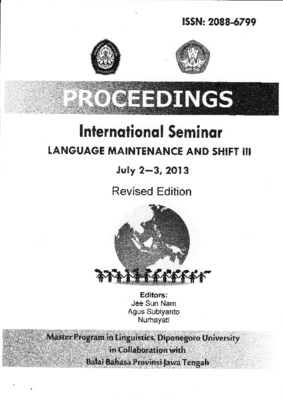 Language—like many other aspects of life—changes over time. All living languages will experience changes. The slightest indication of language change can be seen in older and younger generation. The earlier generation of language user might speak differently from the younger generation and vice versa. Because language contains form and meaning, the changes are not only limited to the form, but also to the meaning. Indonesian language, as a living language, has its periodical changes and one of them is Classical Malay. Hikayat Hang Tuah is one of the most well-known classical Malay texts. Due to language change, there are some differences in Malay language written in Hikayat Hang Tuah and Modern Malay (Indonesian language). The differences can be seen clearly in the grammatical aspects such as affixes, word order, etc. In addition, the changes also cover semantic area. There are some words used in classical Malay which still exist today but the meanings probably shift. Based on the previous explanation, it is intriguing to analyze the semantic shift in words written in Hikayat Hang Tuah compare to Indonesian Language. However, there are multi-factors triggering the change of language, including culture. Therefore, this paper will not only describe the semantic shift on Malay words in Hikayat Hang Tuah, but also the cultural context affecting the change