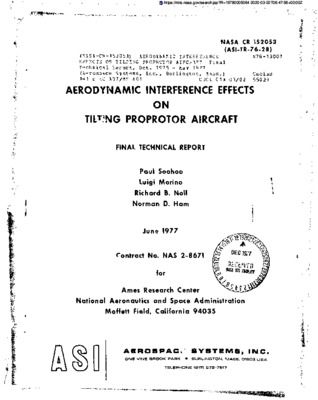 The Green's function method was used to study tilting proprotor aircraft aerodynamics with particular application to the problem of the mutual interference of the wing-fuselage-tail-rotor wake configuration. While the formulation is valid for fully unsteady rotor aerodynamics, attention was directed to steady state aerodynamics, which was achieved by replacing the rotor with the actuator disk approximation. The use of an actuator disk analysis introduced a mathematical singularity into the formulation; this problem was studied and resolved. The pressure distribution, lift, and pitching moment were obtained for an XV-15 wing-fuselage-tail rotor configuration at various flight conditions. For the flight configurations explored, the effects of the rotor wake interference on the XV-15 tilt rotor aircraft yielded a reduction in the total lift and an increase in the nose-down pitching moment. This method provides an analytical capability that is simple to apply and can be used to investigate fuselage-tail rotor wake interference as well as to explore other rotor design problem areas