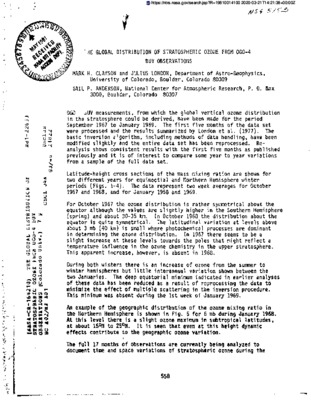 The global distribution of stratospheric ozone from OGO-4 BUV observations

Latitude-height cross sections of the mass mixing ration are shown for two different years for equinoctial and Northern Hemisphere winter periods. The data represent two week averages for October 1967 and 1968, and for January 1958 and 1969. For October 1967, the ozone distribution is symmetrical about the equator although the values are higher in the Southern Hemisphere (spring) and about 30-35 km. In October 1968, the distribution about the equator is quite symmetrical. The latitudinal variation at levels above about 3 mb (40 km) is small where photochemical processes are dominant in determining the ozone distribution. In 1967, there is a slight increase at these levels towards the poles that reflect a temperature influence in the ozone chemistry in the upper stratosphere. This increase, however, is absent in 1968