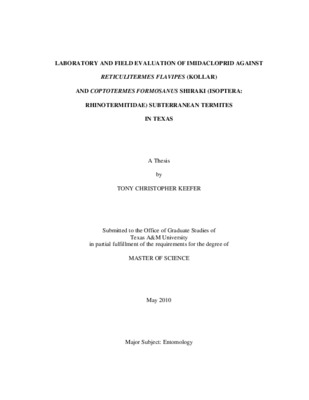 In one study described herein, 20 privately owned structures were treated with a 0.05% application of imidacloprid (Premise 75 WSP) in order to control infestations of subterranean termites. All applications were made at 15 L per 3.05 linear m per 0.30 m of depth. Ten structures were infested with Reticulitermes flavipes (Kollar) and ten structures were infested with Coptotermes formosanus Shiraki. All structures were inspected through 42 months post-treatment. Only one structure infested with R. flavipes required post-treatment action. Six structures infested with C. formosanus required post-treatment action. In another study, efficacy data were gathered on Premise Granules when broadcast over an open field and when utilized as a "spot treatment" for control of subterranean termites infesting structures. Open field grids with active R. flavipes were utilized in this study. Grids measuring 8.53 m x 7.32 m were marked off, in-ground commercial termite monitors were installed, and grids were treated with Premise Granules. Untreated southern yellow pine surface boards were then placed in grids to determine if Premise Granules would suppress foraging and feeding on surface boards. Premise Granules did suppress surface feeding of R. flavipes for 9 months post-treatment, although termites were active throughout the study in in-ground commercial termite monitors within treated grids. In a third study, 10 structures built on monolithic slabs, five received a "spot treatment" with Premise Granules at points of subterranean termite infestation 0.61 m either side of active exterior subterranean termite mud tubes. Structures were inspected through 12 mo post-treatment. Suppression of R. flavipes was sustained for 8 wks in all treatment replications following application of granules, with failures at 8, 12, and 28 weeks post-treatment. A laboratory trial was initiated to simulate field treatments with Premise 75 WP 0.10 % AI imidacloprid for treatments of structures. The focus of this research was to investigate the dissipation and translocation of imidacloprid in urban environments. Treated sandy loam soil was added to 19-L buckets. Four different plant species commonly found in urban environments were planted in buckets. Results in these trials indicate that imidacloprid was soluble and that there is leaching