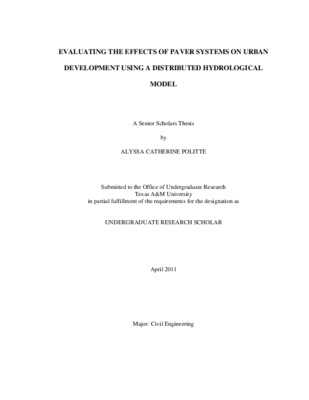 By Alyssa Politte
Get PDF (4 MB)

Cities are becoming increasingly more urbanized through the conversion of forest,pasture and croplands. By replacing the natural environment with impervious areas such as parking lots, roads, houses and other concrete structures, humans are causing an increase in storm water runoff problems with potentially deleterious environmental effects. Traditionally storm water runoff has been handled and controlled using Best Management Practices (BMPs) to control flood runoff events. An alternative approach is to use Low Impact Development (LID) options. LIDs have been proposed in an attempt to mimic the natural flow regime by controlling storm water at the source. LID practices such as rainwater harvesting, green roofs, and permeable pavement can be used to replace existing infrastructure with the goal of reducing runoff volumes and peak flows. A more specific type of permeable pavement which will be the focus of this paper, called Paver Systems uses permeable pavement and aggregate to deliver filtered water to aquifers and prevent initial runoff. A modeling approach to incorporate a type of permeable pavement, called paver systems, into an existing hydrological model will yield an estimation of the effects of paver systems on stream flow. The modeling approach has been applied to a watershed located in Houston, Texas in Brays Bayou called Harris Gully to predict the impact of paver systems on storm water runoff