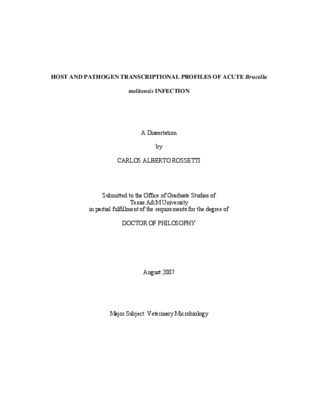 The parallel gene expression profiles of Brucella melitensis and the host have not been elaborated. In this study, I analyze and discuss the transcriptional profiles of B. melitensis invasive-associated genes, the expression profile of intracellular B. melitensis and B. melitensis-infected non-phagocytic cells in the first 12 h post-infection (PI), and the in vivo temporal global transcriptome of both B. melitensis and the infected bovine host in the first 4 h PI. The initial study found that B. melitensis at late-log phase of growth were more invasive in non-phagocytic cells than at early-log or stationary growth phase. Microarray-based studies identified 454 Brucella genes differentially expressed between the most and the least invasive growth phases. Additionally, B. melitensis strains with transposon interrupted in loci BMEII0380 (acrA) and BMEI1538 (hypothetical protein) were found to be deficient in internalization compare with the wild-type strain. A second experiment was designed with the goal of characterizing host and pathogen transcriptome in parallel. For detecting intracellular Brucella gene expression, a combined protocol consisting of a linear amplification of sense-stranded RNA biased to pathogen transcripts to the previously enriched host:pathogen RNA mixed sample, was developed. RNA samples were hybridized on human and Brucella cDNA microarrays, which analysis revealed a common down-regulation transcriptional profile at 4 h PI that was reverse at 12 h PI. The integrity of B. melitensis virB operon and the expression of host MAPK1 were confirmed as critical for early B. melitensis intracellular survival and replication in non-phagocytic cells. Finally, a temporal morphological and molecular characterization of the initial B. melitensis:bovine host interaction using a calf ileal loop model was performed. B. melitensis was isolated from intestinal Peyer’s patches as soon as 15 min and from systemic blood after 30 min postintra luminal inoculation. Microarray results revealed a common transcriptional profile in Brucella, but two different transcriptional profiles were identified in the host in the first 4 h PI. The importance of differentially expressed biological processes, pathways and individual genes in the initial Brucella pathogenesis is discussed