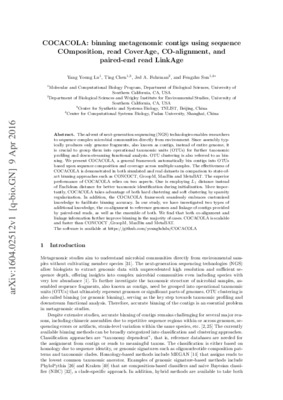 The advent of next-generation sequencing (NGS) technologies enables researchers to sequence complex microbial communities directly from environment. Since assembly typically produces only genome fragments, also known as contigs, instead of entire genome, it is crucial to group them into operational taxonomic units (OTUs) for further taxonomic profiling and down-streaming functional analysis. OTU clustering is also referred to as binning. We present COCACOLA, a general framework automatically bin contigs into OTUs based upon sequence composition and coverage across multiple samples. The effectiveness of COCACOLA is demonstrated in both simulated and real datasets in comparison to state-of-art binning approaches such as CONCOCT, GroopM, MaxBin and MetaBAT. The superior performance of COCACOLA relies on two aspects. One is employing $L_{1}$ distance instead of Euclidean distance for better taxonomic identification during initialization. More importantly, COCACOLA takes advantage of both hard clustering and soft clustering by sparsity regularization. In addition, the COCACOLA framework seamlessly embraces customized knowledge to facilitate binning accuracy. In our study, we have investigated two types of additional knowledge, the co-alignment to reference genomes and linkage of contigs provided by paired-end reads, as well as the ensemble of both. We find that both co-alignment and linkage information further improve binning in the majority of cases. COCACOLA is scalable and faster than CONCOCT ,GroopM, MaxBin and MetaBAT. The software is available at https://github.com/younglululu/COCACOLAComment: 15 pages, 5 figures, 1 table paper accepted at the RECOMB-Seq 201