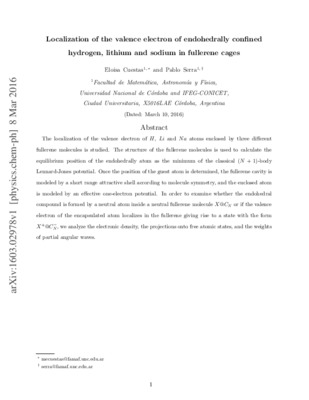 Localization of the valence electron of endohedrally confined hydrogen, lithium and sodium in fullerene cages

By Eloisa Cuestas and Pablo Serra
Get PDF (790 KB)

The localization of the valence electron of $H$, $Li$ and $Na$ atoms enclosed by three different fullerene molecules is studied. The structure of the fullerene molecules is used to calculate the equilibrium position of the endohedrally atom as the minimum of the classical $(N+1)$-body Lennard-Jones potential. Once the position of the guest atom is determined, the fullerene cavity is modeled by a short range attractive shell according to molecule symmetry, and the enclosed atom is modeled by an effective one-electron potential. In order to examine whether the endohedral compound is formed by a neutral atom inside a neutral fullerene molecule $X@C_{N}$ or if the valence electron of the encapsulated atom localizes in the fullerene giving rise to a state with the form $X^{+}@C_{N}^{-}$, we analyze the electronic density, the projections onto free atomic states, and the weights of partial angular waves