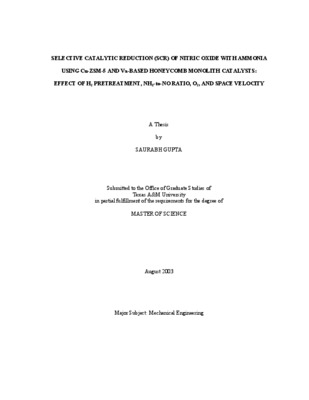 By Saurabh Gupta
Get PDF (2 MB)

In this work, the steady-state performance of zeolite-based (Cu-ZSM-5) and vanadium-based honeycomb monolith catalysts was investigated in the selective catalytic reduction process (SCR) for NO removal using NH3. The aim was to delineate the effect of various parameters including pretreatment of the catalyst sample with H2, NH3-to-NO ratio, inlet oxygen concentration, and space velocity. The concentrations of the species (e.g. NO, NH3, and others) were determined using a Fourier Transform Infrared (FTIR) spectrometer. The temperature was varied from ambient (25 C) to 500 C. The investigation showed that all of the above parameters (except pre-treatment with H2) significantly affected the peak NO reduction, the temperature at which peak NO reduction occurred, and residual ammonia left at higher temperatures (also known as 'NH3 slip'). Depending upon the particular values of the parameters, a peak NO reduction of around 90% was obtained for both the catalysts. However, an accompanied generation of N2O and NO2 species was observed as well, being much higher for the vanadium-based catalyst than for the Cu-ZSM-5 catalyst. For both catalysts, the peak NO reduction decreased with an increase in space velocity, and did not change significantly with an increase in oxygen concentration. The temperatures at which peak NO reduction and complete NH3 removal occurred increased with an increase in space velocity but decreased with an increase in oxygen concentration. The presence of more ammonia at the inlet (i.e. higher NH3-to-NO ratio) improved the peak NO reduction but simultaneously resulted in an increase in residual ammonia. Pretreatment of the catalyst sample with H2 (performed only for the Cu-ZSM-5 catalyst) did not produce any perceivable difference in any of the results for the conditions of these experiments