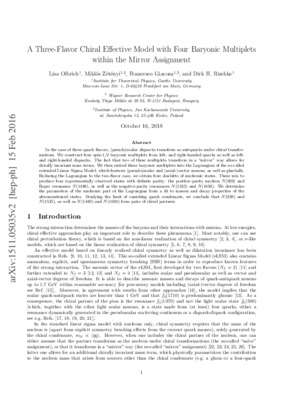 In the case of three quark flavors, (pseudo)scalar diquarks transform as antiquarks under chiral transformations. We construct four spin-1/2 baryonic multiplets from left- and right-handed quarks as well as left- and right-handed diquarks. The fact that two of these multiplets transform in a "mirror" way allows for chirally invariant mass terms. We then embed these baryonic multiplets into the Lagrangian of the so-called extended Linear Sigma Model, which features (pseudo)scalar and (axial-)vector mesons, as well as glueballs. Reducing the Lagrangian to the two-flavor case, we obtain four doublets of nucleonic states. These mix to produce four experimentally observed states with definite parity: the positive-parity nucleon $N(939)$ and Roper resonance $N(1440)$, as well as the negative-parity resonances $N(1535)$ and $N(1650)$. We determine the parameters of the nucleonic part of the Lagrangian from a fit to masses and decay properties of the aforementioned states. Studying the limit of vanishing quark condensate, we conclude that $N(939)$ and $N(1535)$, as well as $N(1440)$ and $N(1650)$ form pairs of chiral partners.Comment: 19 pages, 3 figure