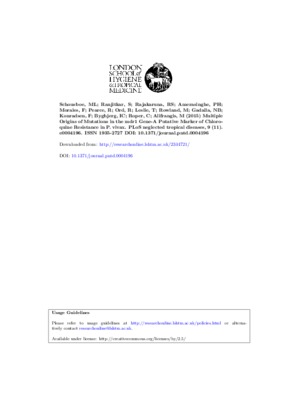 Multiple Origins of Mutations in the mdr1 Gene--A Putative Marker of Chloroquine Resistance in P. vivax.

BACKGROUND: Chloroquine combined with primaquine has been the recommended antimalarial treatment of Plasmodium vivax malaria infections for six decades but the efficacy of this treatment regimen is threatened by chloroquine resistance (CQR). Single nucleotide polymorphisms (SNPs) in the multidrug resistance gene, Pvmdr1 are putative determinants of CQR but the extent of their emergence at population level remains to be explored. OBJECTIVE: In this study we describe the prevalence of SNPs in the Pvmdr1 among samples collected in seven P. vivax endemic countries and we looked for molecular evidence of drug selection by characterising polymorphism at microsatellite (MS) loci flanking the Pvmdr1 gene. METHODS: We examined the prevalence of SNPs in the Pvmdr1 gene among 267 samples collected from Pakistan, Afghanistan, Sri Lanka, Nepal, Sudan, São Tomé and Ecuador. We measured and diversity in four microsatellite (MS) markers flanking the Pvmdr1 gene to look evidence of selection on mutant alleles. RESULTS: SNP polymorphism in the Pvmdr1 gene was largely confined to codons T958M, Y976F and F1076L. Only 2.4% of samples were wildtype at all three codons (TYF, n = 5), 13.3% (n = 28) of the samples were single mutant MYF, 63.0% of samples (n = 133) were double mutant MYL, and 21.3% (n = 45) were triple mutant MFL. Clear geographic differences in the prevalence of these Pvmdr mutation combinations were observed. Significant linkage disequilibrium (LD) between Pvmdr1 and MS alleles was found in populations sampled in Ecuador, Nepal and Sri Lanka, while significant LD between Pvmdr1 and the combined 4 MS locus haplotype was only seen in Ecuador and Sri Lanka. When combining the 5 loci, high level diversity, measured as expected heterozygosity (He), was seen in the complete sample set (He = 0.99), while He estimates for individual loci ranged from 0.00-0.93. Although Pvmdr1 haplotypes were not consistently associated with specific flanking MS alleles, there was significant differentiation between geographic sites which could indicate directional selection through local drug pressure. CONCLUSIONS: Our observations suggest that Pvmdr1 mutations emerged independently on multiple occasions even within the same population. In Sri Lanka population analysis at multiple sites showed evidence of local selection and geographical dispersal of Pvmdr1 mutations between sites