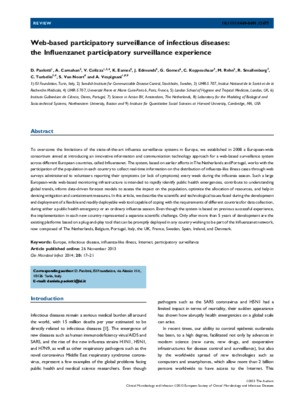 To overcome the limitations of the state-of-the-art influenza surveillance systems in Europe, we established in 2008 a European-wide consortium aimed at introducing an innovative information and communication technology approach for a web-based surveillance system across different European countries, called Influenzanet. The system, based on earlier efforts in The Netherlands and Portugal, works with the participation of the population in each country to collect real-time information on the distribution of influenza-like illness cases through web surveys administered to volunteers reporting their symptoms (or lack of symptoms) every week during the influenza season. Such a large European-wide web-based monitoring infrastructure is intended to rapidly identify public health emergencies, contribute to understanding global trends, inform data-driven forecast models to assess the impact on the population, optimize the allocation of resources, and help in devising mitigation and containment measures. In this article, we describe the scientific and technological issues faced during the development and deployment of a flexible and readily deployable web tool capable of coping with the requirements of different countries for data collection, during either a public health emergency or an ordinary influenza season. Even though the system is based on previous successful experience, the implementation in each new country represented a separate scientific challenge. Only after more than 5 years of development are the existing platforms based on a plug-and-play tool that can be promptly deployed in any country wishing to be part of the Influenzanet network, now composed of The Netherlands, Belgium, Portugal, Italy, the UK, France, Sweden, Spain, Ireland, and Denmark