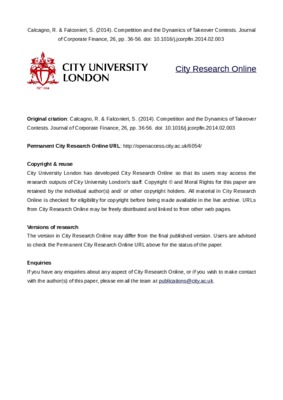 Competition and the Dynamics of Takeover Contests

This paper investigates the effect of potential competition on takeovers which we model as a bargaining game with alternating offers where calling an auction represents an outside option for each bidder at each stage of the game. The model describes a takeover process that is initiated by an unsolicited bidder, and it aims to answer three main questions: who wins the takeover and how? when? and how much is the takeover premium? Our results explain why the takeover premium resulting from a negotiated deal is not significantly different from that resulting from an auction, and why tender offers are rarely observed in reality. We also show that when the threat of the initial bidder to call a tender offer is not credible, the takeover process might end with a private auction organized by the target. Conversely, when the tender offer threat is credible, the takeover process ends with a deal negotiated bilaterally between the bidder and the target. The takeover premium always depends on the degree of potential competition, while it is affected by the target resistance only for weak initial bidders. Finally, the model allows us to draw conclusions on how other dimensions of the takeover process, such as termination fees, control benefits and tender offer costs, affect its dynamics and outcome