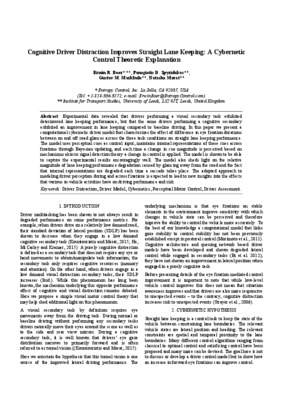 Experimental data revealed that drivers performing a visual secondary task exhibited deteriorated lane keeping performance, but that the same drivers performing a cognitive secondary exhibited an improvement in lane keeping compared to baseline driving. In this paper we present a computational cybernetic driver model that characterizes the effect of difference in eye fixation durations between on and off road glances across the three task conditions on straight lane keeping performance. The model uses perceptual cues as control input, maintains internal representations of these cues across fixations through Bayesian updating, and each time a change in cue magnitude is perceived based on mechanisms akin to signal detection theory a change in control is applied. The model is shown to be able to capture the experimental results encouragingly well. The model also sheds light on the relative magnitude of lane keeping performance degradation caused by glancing away from the road and the fact that internal representations are degraded each time a saccade takes place. The adopted approach to modeling driver perception during and across fixations is expected to lead to new insights into the effects that various in-vehicle activities have on driving performance and risk