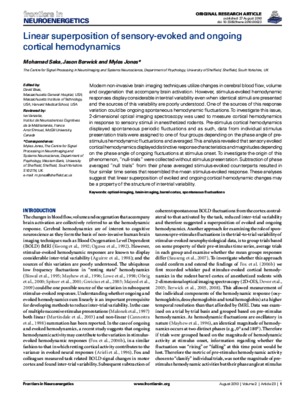 Modern non-invasive brain imaging techniques utilize changes in cerebral blood flow, volume and oxygenation that accompany brain activation. However, stimulus-evoked hemodynamic responses display considerable inter-trial variability even when identical stimuli are presented and the sources of this variability are poorly understood. One of the sources of this response variation could be ongoing spontaneous hemodynamic fluctuations. To investigate this issue, 2-dimensional optical imaging spectroscopy was used to measure cortical hemodynamics in response to sensory stimuli in anesthetized rodents. Pre-stimulus cortical hemodynamics displayed spontaneous periodic fluctuations and as such, data from individual stimulus presentation trials were assigned to one of four groups depending on the phase angle of pre-stimulus hemodynamic fluctuations and averaged. This analysis revealed that sensory evoked cortical hemodynamics displayed distinctive response characteristics and magnitudes depending on the phase angle of ongoing fluctuations at stimulus onset. To investigate the origin of this phenomenon, "null-trials" were collected without stimulus presentation. Subtraction of phase averaged "null trials" from their phase averaged stimulus-evoked counterparts resulted in four similar time series that resembled the mean stimulus-evoked response. These analyses suggest that linear superposition of evoked and ongoing cortical hemodynamic changes may be a property of the structure of inter-trial variability