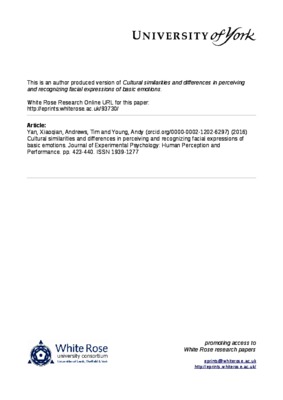 The ability to recognize facial expressions of basic emotions is often considered a universal human ability. However, recent studies have suggested that this commonality has been overestimated and that people from different cultures use different facial signals to represent expressions (Jack, Blais, Scheepers, Schyns, & Caldara, 2009; Jack, Caldara, & Schyns, 2012). We investigated this possibility by examining similarities and differences in the perception and categorization of facial expressions between Chinese and white British participants using whole-face and partial-face images. Our results showed no cultural difference in the patterns of perceptual similarity of expressions from whole-face images. When categorizing the same expressions, however, both British and Chinese participants were slightly more accurate with whole-face images of their own ethnic group. To further investigate potential strategy differences, we repeated the perceptual similarity and categorization tasks with presentation of only the upper or lower half of each face. Again, the perceptual similarity of facial expressions was similar between Chinese and British participants for both the upper and lower face regions. However, participants were slightly better at categorizing facial expressions of their own ethnic group for the lower face regions, indicating that the way in which culture shapes the categorization of facial expressions is largely driven by differences in information decoding from this part of the face