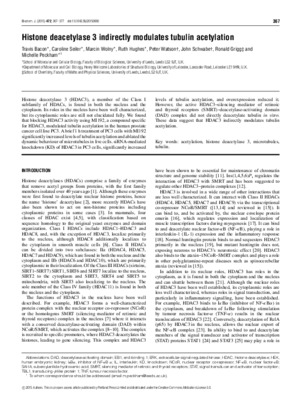 Histone Deacetylase 3 (HDAC3), a member of the Class I subfamily of histone deacetylases, is found in both the nucleus and the cytoplasm. Its roles in the nucleus have been well characterised, but its cytoplasmic roles are still not elucidated fully. We found that blocking HDAC3 activity using MI192, a compound specific for HDAC3, modulated tubulin acetylation in the human prostate cancer cell line PC3. A brief 1 hour treatment of PC3 cells with MI192 significantly increased levels of tubulin acetylation and ablated the dynamic behaviour of microtubules in live cells. siRNA mediated knockdown of HDAC3 in PC3 cells, significantly increased levels of tubulin acetylation, and overexpression reduced it. However, the active HDAC3:SMRT-DAD complex did not directly deacetylate tubulin in vitro. These data suggest that HDAC3 indirectly modulates tubulin acetylation