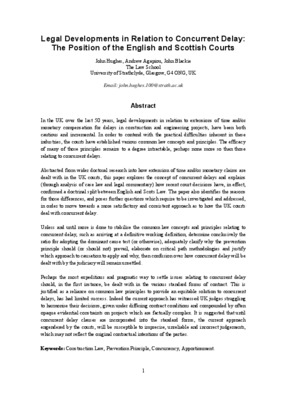 Legal developments in relation to concurrent delay : the position of the English and Scottish courts

In the UK over the last 50 years, legal developments in relation to extensions of time and/or monetary compensation for delays in construction and engineering projects, have been both cautious and incremental. In order to contend with the practical difficulties inherent in these industries, the courts have established various common law concepts and principles. The efficacy of many of those principles remains to a degree intractable, perhaps none more so than those relating to concurrent delays. Abstracted from wider doctoral research into how extension of time and/or monetary claims are dealt with in the UK courts, this paper explores the concept of concurrent delays and explains (through analysis of case law and legal commentary) how recent court decisions have, in effect, confirmed a doctrinal split between English and Scots Law. The paper also identifies the reasons for those differences, and poses further questions which require to be investigated and addressed, in order to move towards a more satisfactory and consistent approach as to how the UK courts deal with concurrent delay. Unless and until more is done to stabilise the common law concepts and principles relating to concurrent delay, such as arriving at a definitive working definition, determine conclusively the ratio for adopting the dominant cause test (or otherwise), adequately clarify why the prevention principle should (or should not) prevail, elaborate on critical path methodologies and justify which approach to causation to apply and why, then confusion over how concurrent delay will be dealt with by the judiciary will remain unsettled. Perhaps the most expeditious and pragmatic way to settle issues relating to concurrent delay should, in the first instance, be dealt with in the various standard forms of contract. This is justified as a reliance on common law principles to provide an equitable solution to concurrent delays, has had limited success. Indeed the current approach has witnessed UK judges struggling to harmonise their decisions, given under differing contract conditions and compounded by often opaque evidential constraints on projects which are factually complex. It is suggested that until concurrent delay clauses are incorporated into the standard forms, the current approach engendered by the courts, will be susceptible to imprecise, unreliable and incorrect judgements, which may not reflect the original contractual intentions of the parties