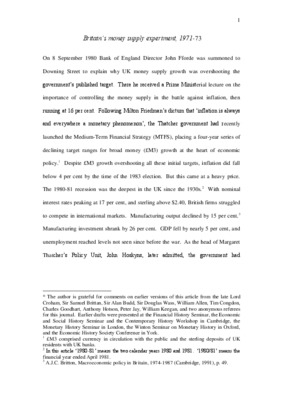 This article challenges the claim that neglect of monetary policy was responsible for the unprecedented UK inflation of the 1970s. It departs from the historiography by showing that the Bank of England and UK Treasury were following unpublished money supply objectives from 1971, two years earlier than is currently acknowledged and five years before Denis Healey first published a money supply target. This early experiment in monetary targeting was not a success. Despite having unpublished monetary targets in place, 1972–73 saw unprecedented growth in the UK money supply. Two years later, inflation hit record levels, apparently vindicating Milton Friedman’s claim that excess monetary growth leads inexorably to higher prices after a long and variable lag. The experience convinced senior Bank and Treasury officials that it was impossible to exercise tight control over the UK money supply. Paradoxically, it also persuaded influential politicians, academics, and commentators, less aware of the technical difficulties and realities of monetary policy implementation, that only tighter control of the money supply would cure Britain of her inflationary ills. The result was the Medium-Term Financial Strategy (MTFS), launched by the Thatcher government in March 1980. This produced a recession of unnecessary severity that has had profound long-term consequences for the shape of the British economy.This is the accepted manuscript of a paper published in The English Historical Review (Needham D, English Historical Review, 2015, 130 (542), 89-122, doi:10.1093/ehr/ceu339). The final version is available at http://dx.doi.org/10.1093/ehr/ceu33