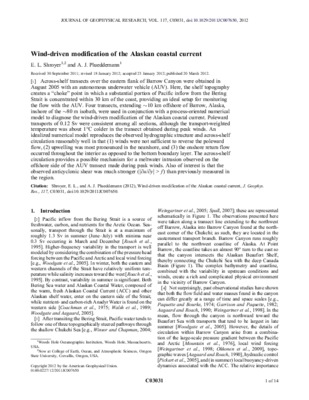 Author Posting. © American Geophysical Union, 2012. This article is posted here by permission of American Geophysical Union for personal use, not for redistribution. The definitive version was published in Journal of Geophysical Research 117 (2012): C03031, doi:10.1029/2011JC007650.Across-shelf transects over the eastern flank of Barrow Canyon were obtained in August 2005 with an autonomous underwater vehicle (AUV). Here, the shelf topography creates a “choke” point in which a substantial portion of Pacific inflow from the Bering Strait is concentrated within 30 km of the coast, providing an ideal setup for monitoring the flow with the AUV. Four transects, extending ∼10 km offshore of Barrow, Alaska, inshore of the ∼80 m isobath, were used in conjunction with a process-oriented numerical model to diagnose the wind-driven modification of the Alaskan coastal current. Poleward transports of 0.12 Sv were consistent among all sections, although the transport-weighted temperature was about 1°C colder in the transect obtained during peak winds. An idealized numerical model reproduces the observed hydrographic structure and across-shelf circulation reasonably well in that (1) winds were not sufficient to reverse the poleward flow, (2) upwelling was most pronounced in the nearshore, and (3) the onshore return flow occurred throughout the interior as opposed to the bottom boundary layer. The across-shelf circulation provides a possible mechanism for a meltwater intrusion observed on the offshore side of the AUV transect made during peak winds. Also of interest is that the observed anticyclonic shear was much stronger (∣∂u/∂y∣ > f) than previously measured in the region.Field work and analysis (A.J.P.) was supported by the Comer Science Education Foundation and the WHOI Ocean and Climate Change Institute. E.L.S. was supported as a WHOI Postdoctoral Scholar.2012-09-2